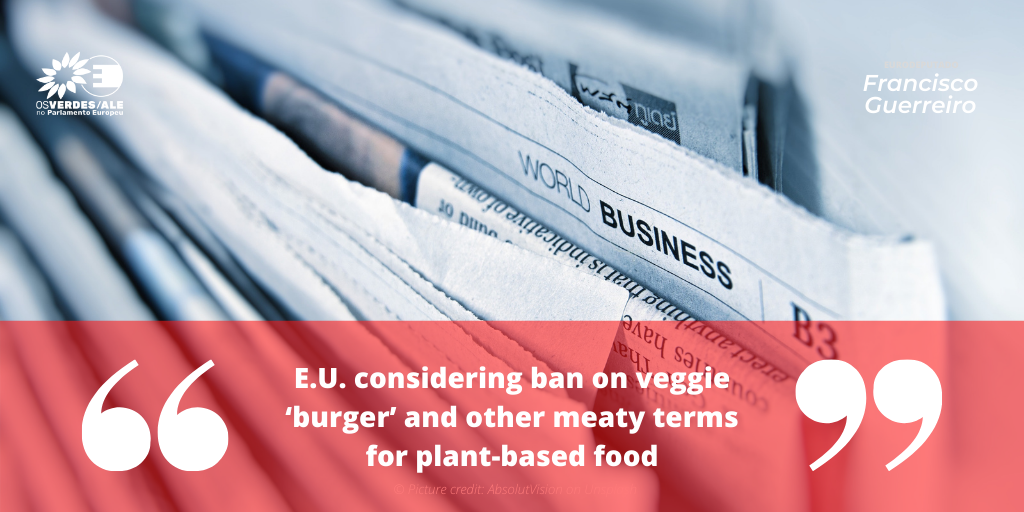 Veggie burgers and vegetarian sausages could face an unappetizing rebranding in the European Union as discs and fingers, with the European Parliament set to vote Wednesday on a proposal that would keep meat labels off non-meat alternatives.

The potential ban on terms that suggest vegetarian alternatives to meat products has been pushed by Europe’s meat industry. Proponents have already won battles to curtail some vegetarian labels in the vast European market: Soy “milk” is illegal across the 27-nation bloc. Veggie “burgers” have been outlawed in France.

The measure has drawn an outcry from European environmentalists, who say that the rebranding could dissuade veggie-curious meat eaters from substituting a plant-based patty between their hamburger buns next time they fire up the grill. Proponents of the ban say that labels’ meanings should be clear and that consumers should not be lulled into thinking that processed veggie sausages are any more healthful than the porky originals. Some of them also say that people can accidentally buy vegetarian products while meaning to buy the meat-based ones when the packaging is unclear.

Similar bans have been enacted in several U.S. states, most recently in Louisiana, where the term “veggie burger” was outlawed starting Oct. 1.

“Replacing meat with a cocktail of chemicals, an ultra-processed product, this is unacceptable,” said Pekka Pesonen, secretary general of COPA-COGECA, an industry group representing European farmers.

Opponents say that such a ban would actually cause more consumer confusion because the term “veggie burger” has been established for decades, and those who buy them actively seek them out. They fear that if meat alternatives are stripped of their cutlet-y labels, they could be exiled to the specialty diet sections of grocery stores, farther from the meat they aim to supplant. Further vegetarian innovation might be stifled, some say.

Veggie burger labels are “for consumers who like meat, who want to eat products that they can eat on a bun, that they can put on a barbecue,” said Alex Holst, policy manager at the Good Food Institute Europe, which has been fighting the ban. “For them, it’s important to have a name that indicates how they can use the product.”

The measure being considered by the European Parliament would ban terms such as “steak,” “escalope” and “hamburger” for products that aren’t made of meat. A separate measure would extend the ban to any term that likens vegetarian products such as plant-based milks, creams and cheeses to dairy ones, like “butter substitute” or “cream-style.”

“I think a sausage should be a sausage. Anything else is just sausage talk,” Pernille Weiss, a Danish center-right lawmaker and proponent of the ban, said during parliamentary debate Tuesday.

Advocates on both sides of the issue say that the 705-member Parliament appears closely split on the ban. Any decision would be subject to further negotiation with representatives of E.U. member states.

But environmentalists say it makes little sense for the European Parliament to start the month by approving a world-leading effort to reduce carbon emissions by 60 percent by 2030, only to turn around two weeks later to enact a ban on low-emissions alternatives to meat. Meat consumption is among the highest-emitting activities in industrialized countries at an individual level. The European Union, meanwhile, has prided itself in green-friendly environmental policies, devoting billions to fight climate change and reduce emissions. The bloc aims to be climate-neutral by 2050 and is racing to implement what it has called a “European Green Deal.”

“The meat and dairy sector are so scared that they are starting a fight on food denominations,” a Portuguese Green lawmaker, Francisco Guerreiro, said during parliamentary debate Tuesday. “But if we care about the environment, the animals and public health, we should facilitate the choice of European consumers.”

Meat alternatives have been gaining in popularity in recent years, with manufacturers of products such as the Impossible Burger boasting that they are far closer in taste and texture to meat than the taupe, tough veggie patties of years past.

“It’s easier to replace pork sausage on your plate with a plant-based sausage than to go from pork-based sausage to a bowl of lentils,” said Vinciane Patelou, director of the European Plant-Based Foods Association, an industry group for producers of dairy and meat alternatives.

The European Union has sometimes been subject to mockery for a perception that it is overly involved in food-labeling issues. Proponents of Britain’s split from the bloc mocked supposed rules about “bendy bananas” — a complaint that had little basis in reality. E.U. food producers cheerfully adhere to a system of food-labeling rules that sets strict rules about how and where delicacies such as Parmesan cheese and champagne can be produced.

But some of the terms on the do-not-label list seem a bit arbitrary, opponents say. Hamburgers are named not after a style of meat but after the German city of Hamburg, for example. And if steaks can be made of tuna, why can’t they be made of tofu? Nor is there dairy butter in peanut butter.

“There is part of the existing animal agricultural industry that just sees these plant-based products succeeding, and sees it as competition,” said Holst, himself a Hamburg native, or Hamburger.