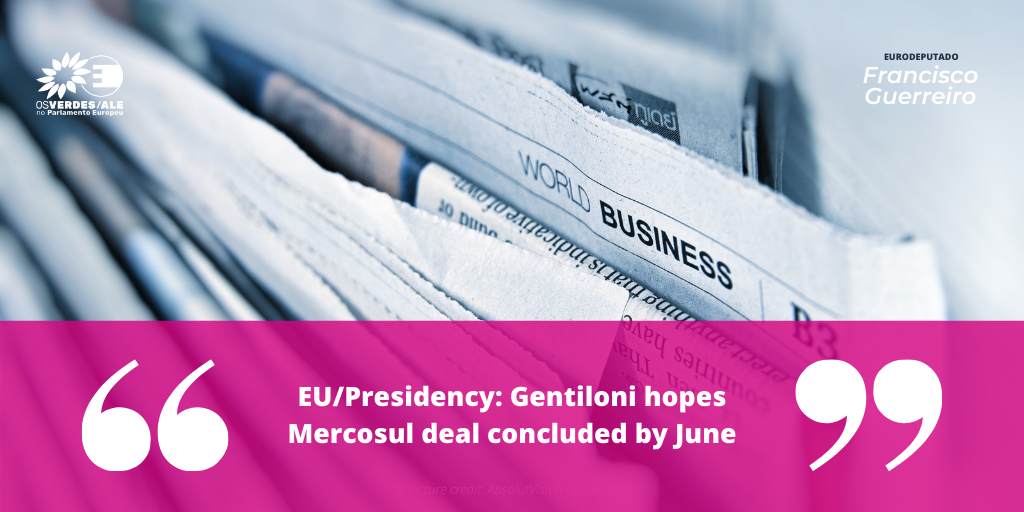 The European commissioner for the economy, Paolo Gentiloni, said on Friday he expects progress during the Portuguese presidency of the European Union (EU) to conclude the trade agreement with the countries of the Southern Common Market (Mercosur), despite speaking of a “challenging” dossier.

“I really hope [that the Portuguese presidency succeeds in promoting the signing of the EU-Mercosur agreement],” Paolo Gentiloni said in an interview with Lusa and other European media in Brussels.

Recalling his political career, the official noted that five years ago, when he was Italy’s foreign minister, the EU was close to agreeing with Mercosur, even though no agreement was reached at that time.

“I was foreign minister five or six years ago, and we were delighted to be almost done and about to get it, but there are always surrounding objections and opposition coming from relevant sectors of important member states,” he said.

At stake is the trade agreement reached in 2019 between the EU and the Mercosur countries (Brazil, Argentina, Paraguay and Uruguay), after two decades of negotiations, which should come into force this year, when it will be up to the European countries to ratify it.

However, several criticisms have emerged from the outset from EU member states, members of the European Parliament and civil society organisations, mainly directed at Brazil for flouting its commitments under the Paris Agreement to combat climate change and failing to commit to combating deforestation of the Amazon.

On Thursday, 65 MEPs urged the Portuguese presidency of the Council of the EU to suspend the trade agreement with Mercosur, reopening negotiations to ensure “clear and effective” environmental protection and sustainability policies.

In a letter signed by MEP Francisco Guerreiro (Greens) and 64 other elected representatives from various political groups, said that if the Portuguese presidency “wants to be consistent” with the Paris Agreement and the European Ecological Pact, it cannot go ahead with ratify [the deal] “as it stands”.

Recalling the words of Foreign Minister Augusto Santos Silva, who stated that the EU is “obligated” to conclude the agreement this year, the Green MEP said that “a real obligation of the 27 member states is to achieve their climate goals”, noting that not only environmental organisations, indigenous peoples and experts have raised “major concerns” regarding the agreement, but also many heads of state and parliaments.

On Wednesday, the secretary of state for internationalisation, Eurico Brilhante Dias, defended the importance of the agreement between the EU and Mercosur, not only in the field of trade but above all at the geopolitical and geostrategic level.