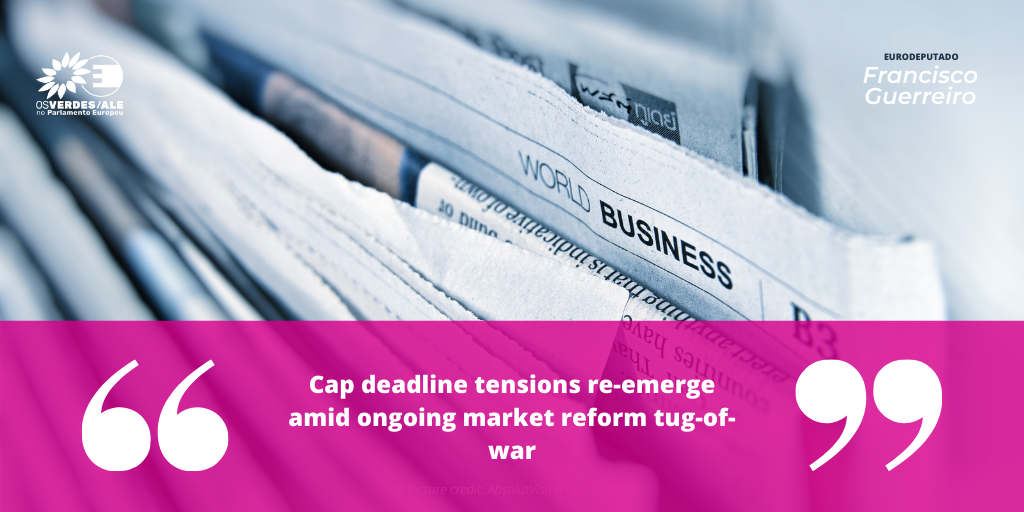 
It’s back to square one for negotiators on the Common Agricultural Policy (CAP) reform, after a déjà-vu trilogue on the common markets organization (CMO) file this week saw Council and Parliament officials walk away fuming and accusing each other of burying all prospects of finishing the reform this spring.

Sparks flew: Both sides reported making no headway on Wednesday’s trilogue on the common market organization (CMO) file, which focused on issues of market regulation and crisis management, with a parliamentary aide saying that Lisbon struck down or countered all of the EP’s compromise proposals.

The file has emerged as a highly divisive one namely because MEPs want it to beef up the Commission’s regulatory power, causing concern among the most market-oriented EU countries, as well as the Commission.

EP to Commission: Eric Andrieu, a French S&D lawmaker and the EP’s lead rapporteur on the file, told MEPs in the agriculture committee on Thursday that Council negotiators were “in a constant war footing” and hit out at Brussels for not taking “an active enough role.”

Different end-goals: Andrieu also complained that the Council’s team attempted to tackle trade-related items that were not on the agenda, suggesting that Lisbon’s priorities may lie elsewhere.

Lisbon’s card? An EU diplomat who is close to the negotiations said that the fallout could even see Lisbon revive its threat of wrapping up the reform without the CMO file, which the diplomat said could be technically feasible. A Commission spokesperson refused to comment on the talks but said Brussels’ aim was to “conclude a comprehensive reform of the CAP.”

And MEPs are united: “The rare consensual mood in today’s AGRI Committee reflected the EP’s desire to have a CAP that is more ambitious than what the Council wants it to be,” Francisco Guerreiro, a Greens/EFA MEP who chaired the committee, said in an email. “If the Portuguese Presidency’s strategy is to stall negotiations so that decisions are then taken last minute to make the Council’s CAP goals prevail, then I inform that the EP highly disapproves [of this] way of ‘negotiating’. The EP should not bend and does not want a last minute deal.”

No milk: Despite expectations, the trilogue clash on Wednesday meant that the subject of veggie food names for plant-based milk alternatives was not discussed and has been pushed back to the next trilogue on April 29.